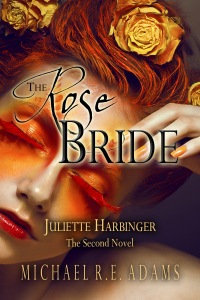 A woman in white walks the streets. She dies in a flurry of roses, and a new dark mystery begins.

When the Heir of Tover invites her to duel, Juliette Harbinger has her chance to end his scheming existence. Unfortunately, the slippery and charismatic socialite always seems ten steps ahead. The only clue Juliette can decipher is the perpetual appearance of black roses, but she cannot reveal she understands their importance. A game of murder and politics reignite legends of a dark power long thought dead. Some skeletons will not stay buried.

In The Rose Bride, Juliette finally garners the respect of her town. As Newton gathers to defeat Tover, she is granted an opportunity to lead her community. However, the dark trail to Hell can only be traveled alone. As demons make their first appearance in Holly Tail, she will have to outwit Tover and avenge a fallen friend.

The Juliette Harbinger series explores the soul’s dark fantasies. Heartbreaking tragedies set Juliette’s course in life as she investigates murders linked to the privileged and elite. Her thrilling quests for answers reveals the dark underbelly of Newton’s enchanted history.